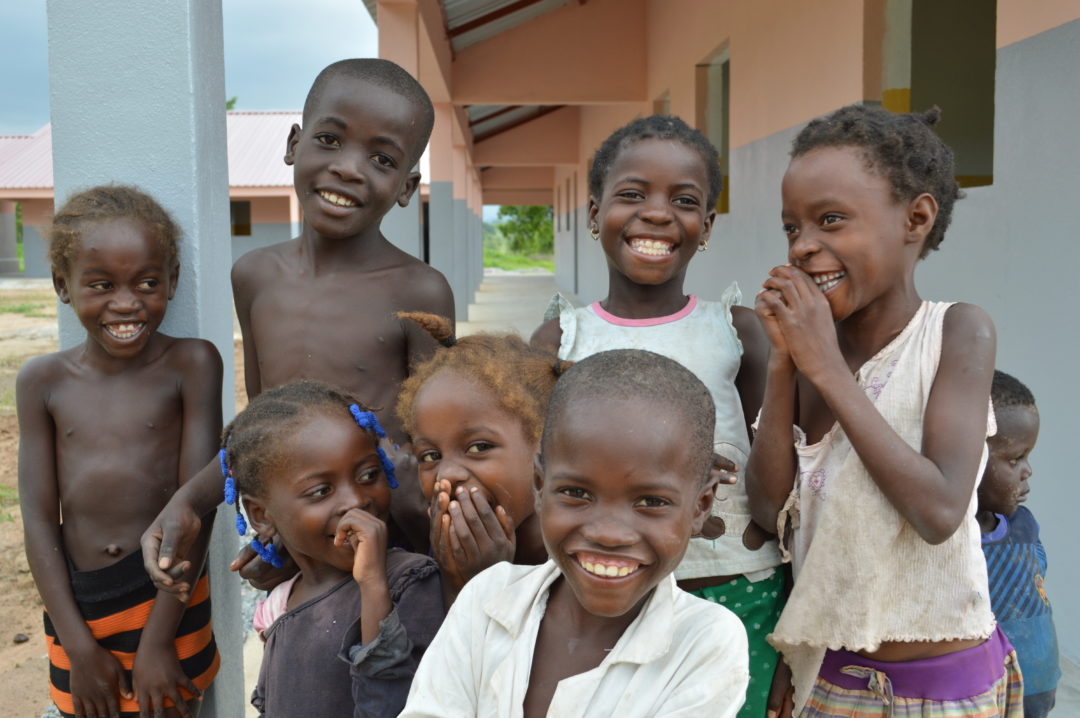 Chicago was in the midst of a snowstorm the night I left, with my flight delayed a couple hours as we waited for de-icing; it was one of the last to be cleared amidst hundreds of cancellations. In stark contrast, I was met with hot, humid temperatures upon reaching Luanda. I arrived home yesterday afternoon, departing Luanda on Tuesday night, flying through Paris and London to Chicago, which was the most cost effective route this time.

It is the rainy season, and much of the country is lush and green, though several southern, dry and dusty areas through which we drove, long for precipitation. Angola has spectacular landscapes and variety, huge rock formations and mountains, valleys and rolling highlands, oceanfront and rivers, blue sky with puffs of white clouds especially in the rainy season, and huge baobab trees. As the focus of this trip was to meet with local administrators and officials, and visit schools under construction and potential sites, we spent hours on the road. Jamba, the young man who was injured in a bad accident when we were in Angola a year ago, has recovered and was driving us again. He is an excellent driver, for which I feel very grateful, as the potential for accidents on the brutal roads is an unsettling reality. There are stretches of tarred roads, many with huge potholes forcing the cars to snake back and forth between both lanes. Some areas are impassable, so a new path has been carved next to the existing road. Periodically, kids armed with shovels fill the holes, and then hold out their hands hoping for a “donation” as you pass.

The President has now been in office for over a year, and continues to make bold changes, committed to eliminating corruption, and working to bring transparency and accountability. The few at the top enjoyed enormous wealth and prosperity for years, the prior President and his family among them, while the majority of the population suffered. People feel hopeful, as the goal is to bring greater equity, though change will take time.

RISE efforts and your generous gifts have been multiplied as a result of our partnership with Educate A Child and ExxonMobil – there are seven schools under construction, with more ready to begin. Adriano Huambo, our Country Director, and our leadership teams, have masterfully scaled to manage the multiple projects. Craftsmen and laborers are grateful for jobs, moving from one school upon completion to the next. They live on site, generally in small tin structures. Provision of employment continues to have a powerful ripple effect in a harsh economy. Three workers were at Sope completing final details when we visited – Adriano explained that they could go home for the weekend and then travel to the school in Lubango to join the bricklayers; they were thrilled!

Kateke, a school for which the first stone was laid on July 13th, is beautiful! One of the village leaders beamed sharing, “We never imagined we would have a school like this. We cannot adequately express our joy; sometimes we drop tears. We are so grateful!” A group of kids showed up, including several boys with fantastic “cars” made of the fruit from the baobab tree which serve as wheels, and a long stick to drive the car. The kids are excited for their “grande” new school – the first time to attend in real classrooms!

RISE has two amazing schools under construction in the Huambo Province – a 12-classroom school at Santa Teresinha Camussamba, with over 2000 primary age kids in need, and Cacilhas Norte, a community committed to education for their children whose story was shared at our benefit. It is in an urban, poor area – to access the school you wind through rutted, mud “streets” lined with block and tin structures, small shops, lots of people, chickens, goats and pigs. For years, the Principal has advocated for the kids, for more than education under trees and in tin rooms, and now said she “feels like someone who is dreaming, or watching tv, as it is too good to be true! At the last meeting with the community, I shared that the project was approved, and the community members were jumping with joy. At moments like this, you don’t find words. Kids will be different – with a building like this, the students, community and country will start changing.”

We met with several truly inspiring principals, committed to fighting for education for the children. They lack infrastructure, resources and materials, but are passionate and persistent. Many parents too, are desperate for education for their children, wanting their kids to have what they did not. Pedro, the Principal at Njele which was dedicated June 1st, talked about the difference they see already, in the students’ motivation, attendance, and ability to complete their coursework because they have classrooms. Sitting in his new office, I noticed fantastic paper/cardboard models of the school and a house that the 6th graders had made – classrooms allow students to be creative, providing protection from rain, mud and wind.

In addition to spending time at each construction site, we visited numerous places in need of a school, both rural and semi-urban, including temporary “classrooms” for some of the more than 2300 kids at Gama. Families living in poverty, most making a living as street-sellers, without access to healthcare, clean water or education, have contributed toward classrooms in hope of a better future for their children.

Hours along the road gave me time to reflect on our journey, the highs and lows, the fifteen years of building schools, with gratitude for the privilege of being involved in something that really matters. My first trip to Angola with Andrew, my late husband, was 20 years ago… hard to believe as time passes so quickly. Huge challenges remain, yet the forward progress is amazing and significant, giving thousands of kids access to education each year – thank you for your part!